Perky indie-pop sibling trio AJR brings its headlining Neotheater World Tour Part II to Isleta Amphitheater on Tuesday 21st July 2020! The second leg of a stint promoting their third studio album, the tour sees the brothers performing tracks from the top-10 record (including recent hit “Dear Winter”), which finds the rising stars stepping into their role as one of the most exciting and innovative up-and-coming bands in pop! Joining them in support will be breakout singer, songwriter and rapper Quinn XCII, & spoken-word-meets-emo band and NPR Tiny Desk favorites Hobo Johnson and The Lovemakers! 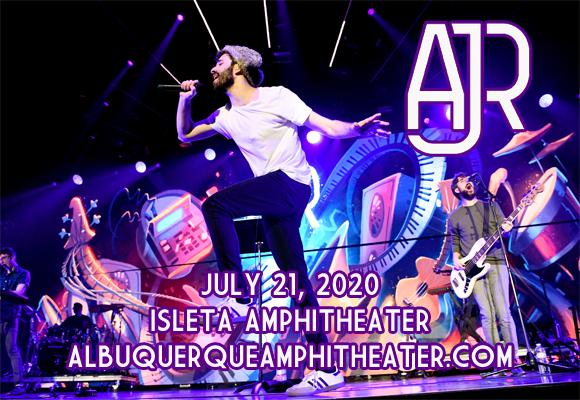 Multi-instrumentalist siblings Adam, Jack, and Ryan Met began making music together in 2005. At the time, the brothers would busk together on the streets of New York City, and they used the money that they earned to form a makeshift studio in the living room of their apartment, creating a home set-up so they could record, produce and mix cover songs. Over the years, they began to write and record original material and in 2012 they decided to take the next step in their career by sending copies of their track "I'm Ready" to a list of established artists. One of those artists was Australian singer-songwriter Sia, who put them in touch with former Columbia president Steve Greenberg. The trio took Greenburg on as their manager and he helped them secure a record deal with Warner Music Group the following year. In 2015, they made their debut with the album Living Room. They had a platinum-selling hit the following year with the single "Weak," which reached number eight on the U.S. Billboard Dance Club chart and became the lead single of their second album, The Click (2017). In 2019, they released their third studio album, Neotheater, which debuted at number eight on the Billboard 200, and reached number one on both the Independent Albums and Top Rock Albums charts.