Pop legends Backstreet Boys are coming to Isleta Amphitheater on Sunday 4th October 2020! The world-famous five-piece will be performing as part of their DNA Tour – the band's biggest outing on the road in 18 years! The tour sees them busting out a fan-satisfying mixture of classics like "Quit Playing Games (with My Heart)," "Everybody (Backstreet's Back,)" and "Larger than Life," as well as tunes from their number-one album DNA (2019)! These expert entertainers will be bringing the party, so get ready to dance like no-one's watching and sing at the top of your lungs with the world's biggest boy band! 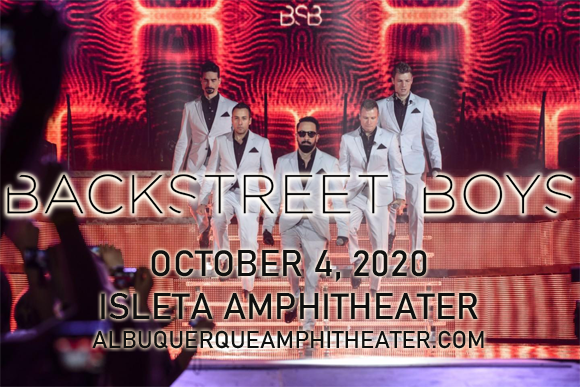 The world's biggest boy band of all time, with over 100 million albums worldwide, Backstreet Boys were a crucial part of the pop explosion of the late-1990s and early-2000s. With their slick, synchronized, choreographed moves, heartthrob looks, tight harmonies and catchy hooks, they took the wolrd by storm, going 14-times platinum with their self-titled 1997 US debut album. That album was the first of 10 consecutive LPs for the band to hit the top 10 of the Billboard 200 – a first for a group since Led Zeppelin, and a first for any boy band ever. When the band hit their 10th anniversary in 2003, they made the decision to embark upon a two-year hiatus, returnging to music in 2005 with the album Never Gone. In 2007, Kevin Richardson left the band to pursue other projects, but returned permanently in 2012. Today, the band retains its original line-up of AJ McLean, Howie Dorough, Nick Carter, Kevin Richardson, and Brian Littrell. In 2013, the group celebrated its 20th anniversary and was honored with a star on the Hollywood Walf of Fame. DNA, the band's ninth studio album (eighth in the US), was released in 2019.