A man who needs no introduction, Bob Dylan comes to Isleta Amphitheater on Friday 26th June 2020 as part of his Never Ending Tour! The world-famous jongleur is the subject of Rolling Thunder Revue: A Bob Dylan Story – Martin Scorsese's recent Netflix documentary about his 1970 Rolling Thunder Revue at New York's Alice Tully Hall. There are few artists who are such indispensable cogs in the mechanism of modern music – Bob Dylan is a truly special act who must be seen live! He'll be joined for his show by support acts Nathaniel Rateliff and The Night Sweats & The Hot Club of Cowtown! 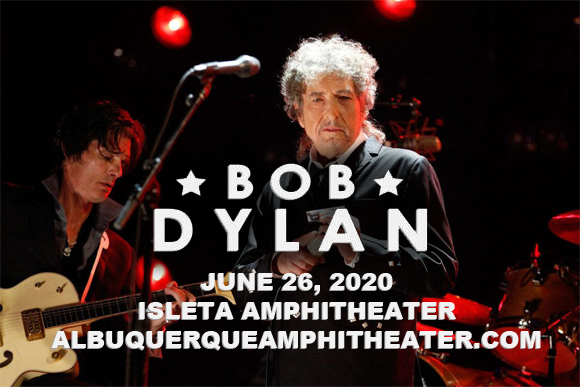 Fuelled by anti-war sentiment and poetic lyricism, Bob Dylan's songs typified the 1960s and have served as inspiration for countless artists that have followed. His earlier folk-influenced work like "Blowin' in the Wind" and "The Times They Are a-Changin'" were considered to speak for a generation – echoing the non-conformist, pro-Civil Rights attitudes of many of the youth of the time. In the mid-1960s, Dylan made the switch to electronic instrumentation, which was controversial amid some fans, but led to some of his most successful albums – Bringing It All Back Home (1965), Highway 61 Revisited (1965) and Blonde on Blonde (1966). Bob Dylan has sold over 100 million albums throughout his career, making him one of the world's best-selling artists of all time. The recipient of 11 Grammy Awards, a Golden Globe Award, and an Academy Award, he has also been honored with a Pulitzer Prize, and the Presidential Medal of Freedom, which he received from President Barack Obama in 2012. He is an inductee of the Rock and Roll Hall of Fame, Minnesota Music Hall of Fame, Nashville Songwriters Hall of Fame, and Songwriters Hall of Fame.