The almighty Breaking Benjamin and Chevelle are coming to shake up Isleta Amphitheater on Friday 13th September 2019 on an explosive co-headline tour that will leave hard rock fans begging for more! Not only will fans get to enjoy a full set from these goliath bands, but they'll be treated to support slots from Three Days Grace, Diamante and Dorothy! Also available as part of the 2019 Ticket To Rock package! 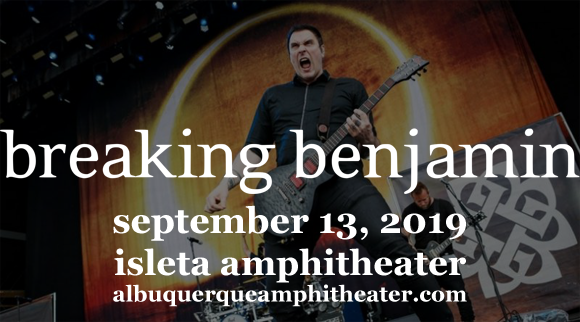 Formed in Wilkes-Barre, Pennsylvania in 1999, American rock band Breaking Benjamin made its major-label debut in 2002 with the release of Saturate. The band's 2004 sophomore album, We Are Not Alone (co-written with Smashing Pumpkins' Billy Corgan), served as their mainstream breakthrough and peaked at number 20 on the Billboard 200. They followed with Phobia (2006) and Dear Agony (2009), both of which peaked in the top five on the Billboard 200, before embarking upon an extended from 2010 through 2015. Their comeback was Dark Before Dawn (2015), their most successful release to date, which debuted at number one on the Billboard 200. Their sixth studio album, and most recent release, is Ember (2018).