Get ready for something very special, Chris Young fans! The Tennessee-based country singer is headed to Isleta Amphitheater on Thursday 15th August 2019 on his Raised on Country Tour, which features fellow country star Chris Janson in support, plus brand new production and plenty of surprises!

“I haven’t done a complete overhaul in two years,” Young says. “We went from the ground up and revamped everything. It’s a completely new tour.” 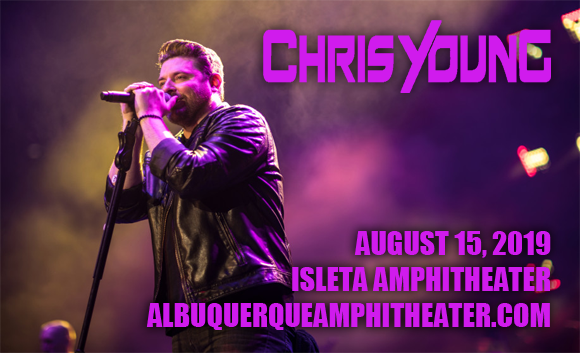 After winning the fourth season of USA Network's reality television singing competition Nashville Star, American country music singer and songwriter Chris Young became a household name. Winning the competition led to a deal with RCA Records, and Young released his self-titled debut album on the label later that year, entering the Billboard Top Country Albums chart at number three. Young followed with his gold-certified sophomore effort, The Man I Want to Be, which launched three number-one singles, one of which was nominated for a Grammy Award. Young's success continued as his career went from strength to strength through the release of five more studio albums of the years – his most recent being 2017's Losing Sleep. He was invited to become a member of the by country legend Vince Gill to become a member of the Grand Ole Opry in 2017, and was officially inducted by Brad Paisley.