One of the most prolific and hard-working bands in rock, even after forty plus years in the industry, Foreigner will be performing at Isleta Amphitheater on Thursday 9th July 2020! This year, the band's annual stint on the road is called the Juke Box Heroes Tour and it sees them joined by '70s prog-rockers Kansas and Swedish rockers Europe! Between the three bands, they are responsible for some of the biggest classic rock hits of all time, including "I Want to Know What Love Is", "Carry On Wayward Son" and "The Final Countdown" – what could be better?! 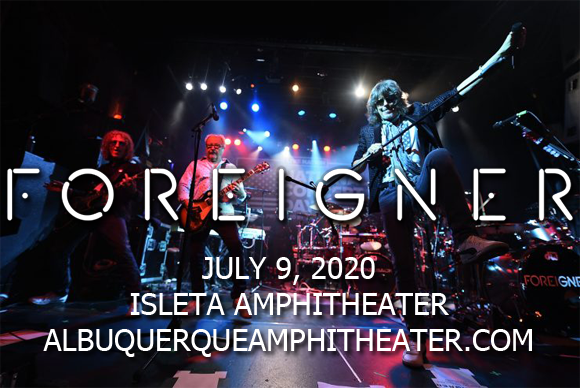 American rock band Foreigner became one of the biggest acts of the late-1970s and early-1980s, catching the world's attention with their game-changing self-titled 1977 debut album, which paved the way for a multitude of rocks bands to come and was a huge commercial hit that went on to be certified five-times platinum in the US. The album launched three top 20 singles – "Feels Like the First Time", "Cold as Ice" and "Long, Long Way from Home" – that typified their unique, radio-friendly blend of larger-than-life hard rock with strong pop hooks, and was the first in a string of six multi-platinum-selling albums for the band, who have had 10 multi-platinum albums to date. Today, Foreigner are one of the world's best-selling music acts of all time, with worldwide slaes of over 80 million albums.