After a three-year hiatus, Heart will embark on the Love Alive Tour this summer, coming to Isleta Amphitheater on Sunday 25th August 2019! The Wilson sisters will be joined by the Queen of Rock 'n' Roll herself Joan Jett and her band the Blackhearts, and vocal powerhouse Elle King!

“I think this year is a good year to show the collective impact of some powerful women in music,” she explained. “We would usually steer clear of the female-centric concept, but in the light of current events it seems like the right statement at the right time.” 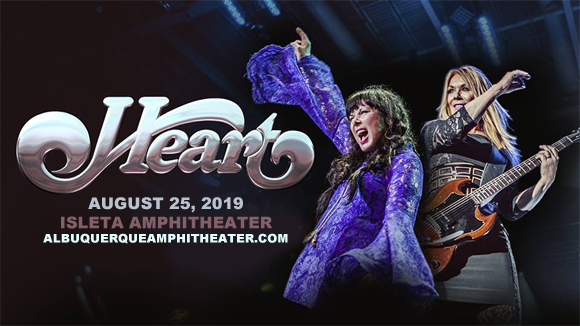 Formed in 1973, Heart are the first female-fronted hard rock band, known for hits like “Alone”, “Barracuda”, “Crazy On You” and “These Dreams”, among others. The band has had a variety of line-ups over the years, but the most recognized and consistent members of the band are sisters Ann Wilson (lead vocals, flute and guitar) and Nancy Wilson (guitar, mandolin and vocals). The group has dominated the top ten of the Billboard 200 over four decades – the longest span of top 10 albums by a female-fronted band – and they have charted seven top 10 albums in total. They have also charted 20 top 40 singles since forming and have sold over 35 million units worldwide, with over 22.5 million in album sales in the U.S. The four-time Grammy-nominated group was inducted into the Rock and Roll Hall of Fame in 2013.