Last year's ACM Dick Clark Artist of the Decade Award, Jason Aldean, is bringing his We Back Tour to Isleta Amphitheater on Thursday 17th September 2020! The world-famous artist is one of country music's top earners with dozens of bona fide hits under his belt and is known for his high-octane live shows, which bring an intoxicating energy that drives crowds wild! The tour is named after the lead single from Aldean's 2019 album, 9, and he'll be performing songs from the release as well as all the hits fans know and love! He'll also be bringing with him a stacked support lineup with special guests Brett Young, Mitchell Tenpenny & Dee Jay Silver! 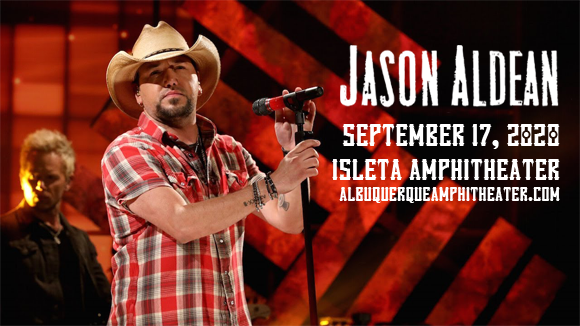 The ACM Dick Clark Artist of the Decade Award 2019, Jason Aldean has enjoyed huge chart success throughout his career, with 27 top 10 singles, including 19 number ones, three platinum-certified albums, and two multi-platinum-selling LPs – 2012's double-platinum certified album Night Train and the 2010 quadruple-platinum-selling album My Kinda Party. The star was ACM's Entertainer of the year three years in a row (2016 – 2018), and their Male Vocalist of the Year for three consecutive years before the (2013 – 2015), and those are just a few of the awards he's been honored with since the release of his debut album in 2005. The self-titled effort was an instant hit, reaching platinum status and launching three hit singles including his first number-one, “Why”. This success was hard-won for Aldean, who set out on his musical journey in 1998 upon moving to Nashville, having spent several years previous playing the bars and clubs of Atlanta, Georgia. After two failed record deals and rejections from several labels, the artist signed to Broken Bow Records, who launched his career. His ninth and most recent studio album, 9, was released in 2019.