British heavy metal icons Judas Priest are coming to Isleta Amphitheater on Saturday 3rd October 2020 on their 50 Heavy Metal Years Tour, celebrating five decades of legendary, world-changing music! The must-see metal giants are some of the greatest veteran performers still on the circuit and their live shows are still mind-blowingly good, with an unsurpassed back catalog to choose from and powerful stage presence! Expect hit after mighty hit from this Goliath group! The UK hard-hitters will be supported by Swedish power metal band Sabaton! 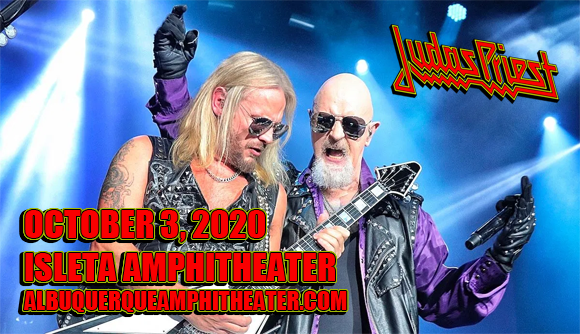 Formed in West Bromwich, UK in 1969, Judas Priest is considered to be one of the greatest heavy metal bands of all time. Though not commerically successful throughout the 1970s, the band's innovative approach to rock music laid the groundwork for subsequent acts in heavy metal. The group's commercial breakthrough came in 1980 with the release of its sixth studio album, British Steel (1980), which reached number four on the UK Albums Chart and number 34 on the Billboard 200, gaining platinum certification by the RIAA. 1982's Screaming for Vengeance was an even bigger hit, reaching the top 20 in both the US and UK, and was certified double-platinum in the US and platinum in Canada. The group's work throughout the 1980s is often said to define the heavy metal sound of that era and its image was an influence on a genaration of metal bands. The band was inducted into the VH1 Rock Honors in 2006, received a Grammy Award for Best Metal Performance in 2010 for "Dissident Aggressor" and has been nominated for induction into the Rock and Roll Hall of Fame 2020 class.