Icelandic alt-rockers Kaleo bring their Fight or Flight Tour to Isleta Amphitheater on Monday 5th October 2020 in support of their new studio album, Surface Sounds! The Grammy Award-nominated band will be performing tracks from the hotly anticipated release, including their 2020 singles "I Want More" and "Break My Baby!"

“Fight or Flight speaks to our instinctual response to choices: to stay and fight or to flee,” lead vocalist and guitarist JJ Julius Son had to say about the tour name. “Throughout the process of making this new album while touring and recording abroad, learning new languages and incorporating sounds from the varying cities I visited, what was most remarkable was seeing first-hand how we are more alike than we are different. This idea to stay, stand our ground and fight for what we believe in keeps resurfacing, and I think as we finish this next record and begin the next chapter, we wanted the fans to know we’re not going anywhere. We’re here with them.” 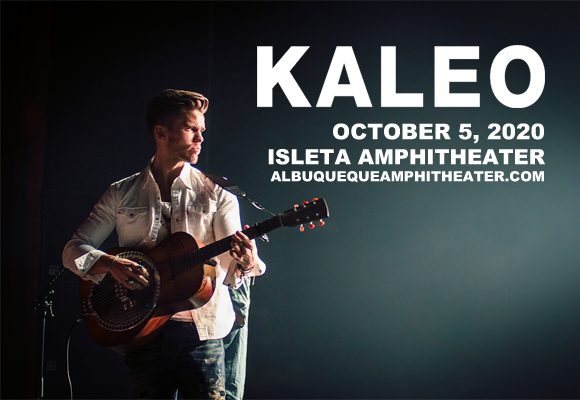 Icelandic alt-rock band Kaleo formed in 2012 and consists of lead vocalist and guitarist JJ Julius Son, drummer David Antonsson, bassist Daniel Kristjansson, and lead guitarist Rubin Pollock. Son, Antonsson and Kristjansson had been friends since elementary school and began playing together at the age of 17, before forming an official band when they added Pollock to the mix. By the end of 2012, the group had signed with Iceland's biggest record label, Sena, having caught the label's attention with a cover of the song "Vor í Vaglaskógi" that received widespread airplay on several national radio stations. The following year, the group released its self-titled debut album, which launched five hit singles and went gold in its home country. Kaleo's 2014 single "All the Pretty Girls" became an international hit thanks to 87 million streams on Spotify, leading to a record deal with Atlantic Records and relocation to Austin, Texas. The band's second studio album, A/B, was released in 2016 and reached number 16 on the Billboard 200 and number four on the US Top Rock Albums Chart, preceded by the singles "Way Down We Go", "No Good", and "I Can't Go On Without You". Surface Sounds, their third album, is slated for a summer 2020 release.