On one of the hottest co-headlining tours of the year, metal giants Korn & Alice In Chains are headed to Isleta Amphitheater on Tuesday 27th August 2019! Seattle rockers Alice In Chains will be performing from their latest album Rainier Fog (2018), which was nominated for a 2019 Grammy Award for Best Rock Album, and nu-metal heroes Korn will be promoting their upcoming thirteenth studio album! 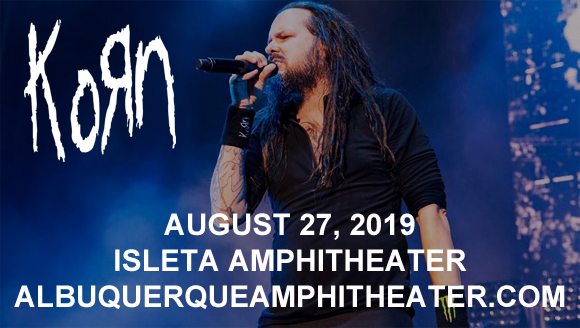 Formed in Bakersfield, California in 1993, American nu-metal band Korn has sold over 35 million albums worldwide to date. Credited with pioneering the nu-metal genre and bringing it to the mainstream, seven of the band's official releases are certified platinum by the Recording Industry Association of America (RIAA), with two double platinum, one triple platinum, one five times platinum and two gold releases. The band was formed after three founding members (James Shaffer, Reginald Arvizu, and David Silveria) disbanded their previous group L.A.P.D., and they made their major-label debut in 1994 with their self-titled album, which launched the single "Blind". To date, twelve of the band's official releases have peaked in the top ten of the Billboard 200, eight of which have peaked in the top five, and they have  earned two Grammy Awards out of eight nominations and two MTV Video Music Awards out of eleven nominations. They have released twelve studio albums throughout their career and their thirteenth is due for release in 2019.