Platinum-selling pop singer, songwriter and producer Lauv comes to Isleta Amphitheater on Saturday 15th August 2020! The independent artist will be performing in support of his long-awaited debut album How I Feel, which sees the singer embrassing six different aspects of his personality: existential Lauv, hopeless romantic Lauv, goofy Lauv, positive Lauv, f–kboy Lauv, and spicy Lauv, all of whom will be coming out on stage when this authentic and entertaining performer brings his all! Lauv is a rising star – make sure you're there to catch his ascent! 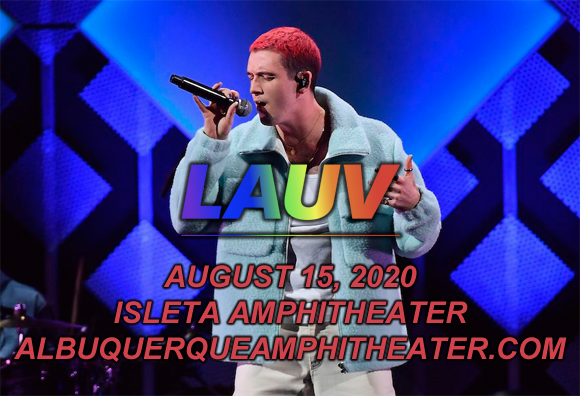 American singer, songwriter and record producer Lauv released his debut EP, Lost in the Light, in 2015. Having signed to the publishing company Prescription Songs after interning for Jungle City Studios whilst at NYU, he began making his name with his songs for other artists, including 2016's "No Promises," which he co-wrote and co-produced for Cheat Codes and Demi Lovato and which reached number 7 on the Billboard Pop Songs chart. In 2017, he had a top-30 hit on the Billboard 200 with the single "I Like Me Better," which went triple-platinum in the US and platinum in several other countries. The following year, he released I Met You When I Was 18 (The Playlist) – a 17-track compilation album of new and previously released tracks. 2018 saw the release of the non-album single "There's No Way" – a collaboration with Julia Michaels. The following year, Lauv released several singles in advance of his 2020 debut album, How I'm Feeling, including the platinum-selling single "I'm So Tired…" ft Troye Sivan. How I'm Feeling was received well by critics and reached number four on the US Independent Albums chart and number 16 on the Billboard 200.