Promoting the release of his brand new album, chart-topping country star Luke Combs comes to Isleta Amphitheater on Thursday 14th October 2021 (Rescheduled from Tuesday 22nd June 2021) on the What You See Is What You Get Tour! Combs will be performing tracks from the album, including number one single "Beer Never Broke My Heart", as well as favorites from his record-breaking debut album, This One's for You!Combs will be joined for the evening by Ashley McBryde and Drew Parker in support! 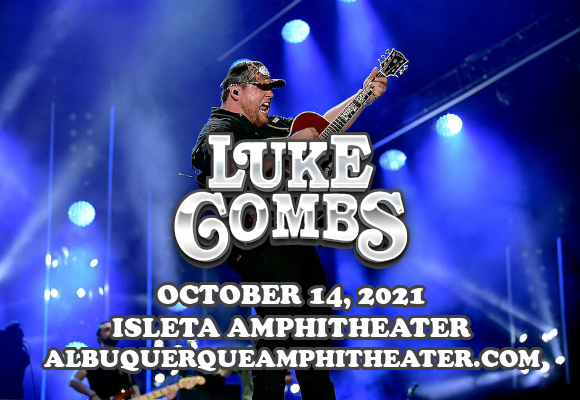 Having fallen deeply in love with singing as a child, it was inevitable that country artist Luke Combs would embark upon a career in music. Combs dropped out of college in his final semester to move to Nashville and follow his dreams, and he released his debut EP, The Way She Rides, in 2014. Later that year, he released his second EP, Can I Get an Outlaw, which contained his debut single "Hurricane", released in 2015. The single sold 15,000 copies in its first week and debuted at number 46 on the Billboard Hot Country Songs chart, foreshadowing the success that was to come. 2017 brought his major label debut album, also titled This One's for You, released on Columbia Nashville and River House Artists. In its first week, the album reached number one on the Billboard Top Country Albums chart and number five on the US Billboard 200 in its first week, and it has since spent a total of 46 weeks at No. 1 on Top Country Albums chart – the longest ever for a male artist.