It's time to bust out your Jagger-style moves as multi-award-winning pop rock group Maroon 5 brings its 2020 world tour to Isleta Amphitheater on Wednesday 3rd June 2020! The band are rumored to be releasing their seventh studio album in 2020, so expect brand new material, as well as classic hits like "This Love", "Makes Me Wonder", "One More Night" and "Girls Like You"! Not only will you get a spectacular headline slot from Adam Levine and co, but they're bringing in an a-list support line-up of Meghan Trainor and Leon Bridges! 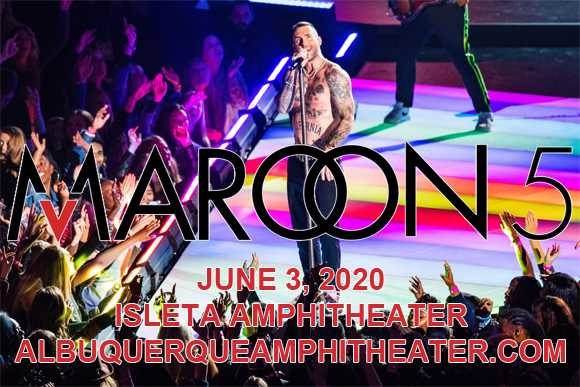 Currently consisting of lead vocalist Adam Levine, keyboardist and rhythm guitarist Jesse Carmichael, bassist Mickey Madden, lead guitarist James Valentine, drummer Matt Flynn, keyboardist PJ Morton, and multi-instrumentalist Sam Farrar, Maroon 5 formed in Los Angeles, California in 1994. The group was founded by high school friends Levine, Carmichael, Madden, and drummer Ryan Dusick under the name Kara's Flowers, and they released one independent album and one major label album on Reprise Records before changing their name in 2001 and signing with Octone Records. The following year, they released Songs About Jane, which served as their breakthrough hit. The album reached the top ten of the US Billboard 200 chart, and launched five hit singles, including "Harder to Breathe", "This Love" and "She Will Be Loved". It also was certified quadruple-platinum by the RIAA. The band's five subsequent albums have all reached the top two of the Billboard 200, and they've all been certified platinum of multi-platinum. Their most recent album is 2017's Red Pill Blues.