Cry Baby herself, Melanie Martinez, brings her brand new tour to Isleta Amphitheater on Thursday 9th July 2020! The K-12 Tour sees the singer performing tracks from her astounding album, which includes the singles “Teacher’s Pet,” “High School Sweethearts,” “Orange Juice” and “Detention!” The album was released alongside a film which was written and directed by Martinez, so in addition to her stunning candy-colored costumes and theatrical performance, expect out-of-this-world visuals from this hgihly conceptual art-pop singer! 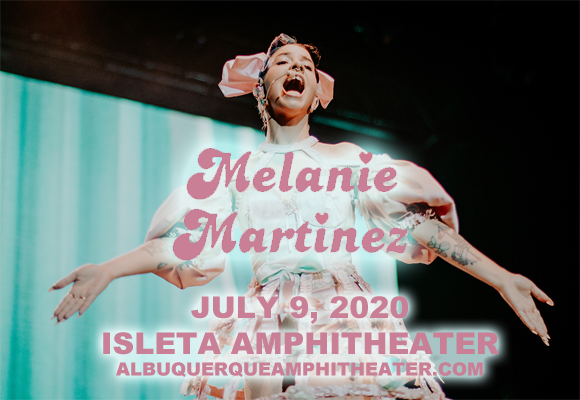 Bringing raw emotionality to slick production, and marrying a highly stylized stage alter-ego with candid, introspective lyrics, Melanie Martinez is a singular artist whose unique and conceptual take on pop music has made her stand out from anyone else in the business. Perhaps even more surprising than the seemingly contradictory directions that her work pulls in, is the fact that she first came to public attention as a contestant on the televised talent competition The Voice in 2012. Martinez did not win the competition, but her time on the show inspired her to take a year to write her own material, and she released "Dollhouse," her debut single, in February 2014. On the strength of her single, she was signed to Atlantic Records, releasing her debut EP (also called Dollhouse) on the label later in the year, which launched the gold-certified single "Carousel". She followed in 2015 with her platinum-selling debut album Cry-Baby, which produced several gold and platinum-selling singles, including "Sippy Cup", "Mrs. Potato Head", "Cry Baby", "Pity Party" and "Soap." In 2019, she released her second studio album, K-12, which was accompanied by a film that she wrote and directed. K-12 reached number-one on both the Billboard Top Soundtracks and Top Alternative Albums charts and debuted at number three on the Billboard 200.