Featuring Michael McDonald as an official member for the first time in nearly 25 years, The Doobie Brothers are headed to Isleta Amphitheater on Friday 9th October 2020 as part of their celebratory 50th Anniversary Tour! A band that has had no end of solid gold hits over the years, across a variety of genres, The Doobie Brothers' music stands the test of time and is an absolute joy to see live! Get ready to sing and dance along to five decade's worth of incredible songs from their illustrious career with the second of two nights of shows from this legendary band! 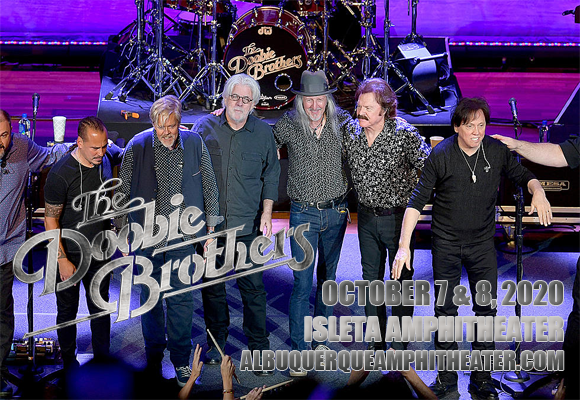 An enduring and varied band with an eclectic array of influences, The Doobie Brothers has remained a radio staple for 50 years. Formed in 1970 in San Jose, California, the group found fame with a unique mixture of rock and roll, folk, country, and R&B. Helmed by lead singer Tom Johnson, the band's first four albums launched a bevy of hit singles, including “Long Train Runnin'”. In 1975, Johnson left and the band took on new frontman Michael McDonald, who brought a soulful flavor to their music. In 1982, the band officially split, but five years later it reformed with Johnson once again joining as frontman and McDonald joining sporadically for gigs and tours as a special guest. In 2019, McDonald rejoined the band as an official member to celebrate the group's 50th anniversary and embark on a nationwide tour. The band was inducted into the Vocal Group Hall of Fame in 2004 and will be inducted into the Rock and Roll Hall of Fame on May 2, 2020.