You've watched your favorite show on TV, but now you get to see it LIVE as The Masked Singer National Tour comes to Isleta Amphitheater on Friday 10th July 2020! That's right, Fox’s hit reality singing competition show is taking to cities all across the US, bringing you two celebrity hosts, a mystery celebrity costumed contestant, and all your favorite mascots for this all-singing, all-dancing show! Can you guess who's behind the mask…? There'll be a different mystery performer for each city, so get keep your ears sharp for this Masked Singer madness! 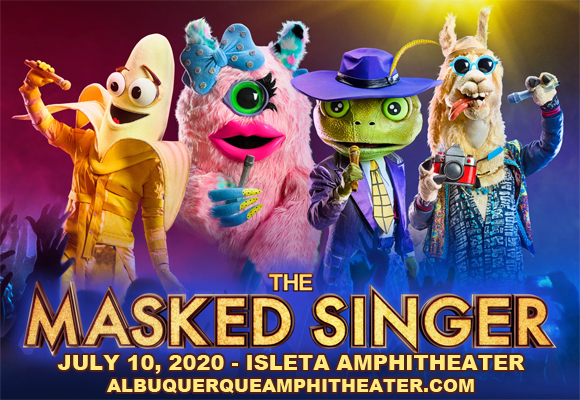 American reality singing competition television series The Masked Singer premiered on Fox on January 2, 2019. Featuring a group of celebrities with their identities concealed by full-length costumes and face masks, the guests each perform a cover of a well-known song every week and are judged by a panel and the audience, and the celebrity with the fewest votes in that episode is eliminated from the competition. The eliminated contested must then take off their mask and reveal their identity. The Masked Singer is now in its third season and its season premiere, which aired after Super Bowl LIV on February 2, 2020, had 26.7 million total viewers, making it television's highest-rated and most-watched reality telecast in eight years.