Are you ready for one of the hottest country tours of the year?! Legendary star Tim McGraw returns to the stage with his first solo headlining tour in five years! The Here On Earth Tour comes to Isleta Amphitheater on Thursday 13th August 2020, and McGraw will be bringing his all to get the party going in the way that only he can! The ultimate country showman, McGraw has it all – hits, talent, charisma and second-to-none stage production, so it's no wonder his are some of the highest-grossing tours ever known! Join the chart-topping star, country trio Midland, and up-and-comer Ingrid Andress, for the country party of the summer! 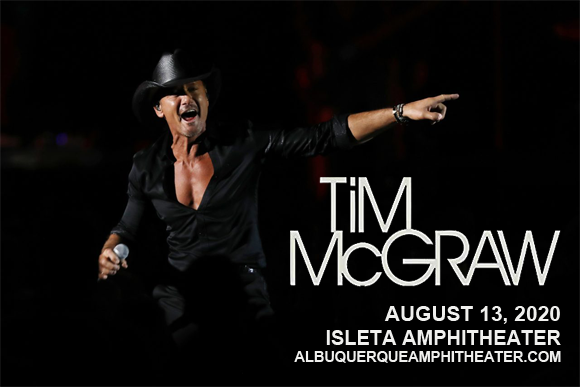 Although his 1993 self-titled debut didn't have the impact either he or his record label hoped it would, when country music performer Tim McGraw did break through to the mainstream, he changed the face of country music forever. McGraw's follow-up, Not a Moment Too Soon (1994), was an almighty success on the strength of the album's novelty lead single, and it went on to top both the Billboard 200 and Top Country Album charts and win McGraw two ACM Awards. By the end of the year, Not a Moment Too Soon was the best-selling country album of 1994. After that, there was no looking back for McGraw, who soon became a heartthrob and overtook Garth Brooks as country's most popular male act. This was helped in part by his high-profile 1996 marriage to fellow country singer Faith Hill, but it was also due to his unique and fresh take on country that combined honky tonk with a more polished, radio-friendly sound. This proved to be a hugely popular and winning formula for the artist, who has since become one of the world's biggest-selling music acts of all time, with over 80 million albums sold worldwide. To date, he has released 15 albums, 10 of which have topped the Billboard Top Country Albums Chart. McGraw has also produced a whopping 65 singles, with 25 of them reaching number one on the Hot Country Songs or Country Airplay charts, and has had three singles that were the best-selling country songs of their respective years of release ("It's Your Love", "Just to See You Smile", and "Live Like You Were Dying"). His success has also been reflected with a plethora of awards, with three Grammy Awards, 14 Academy of Country Music awards, 11 Country Music Association (CMA) awards, 10 American Music Awards, and three People's Choice Awards to his name.