Alrighty Albuquerque! Are you ready to Country!!? Yeah! That’s the spirit! Global country music superstar Brad Paisley will be at Isleta Amphitheater on Thursday, October 7th 2021. Not only do we have the Star Brad Paisley, but tonight you also get very special guests, multi-platinum selling and current ACM New Male Artist Jimmie Allen and Columbia Nashville rising star Kameron Marlowe. Yeah, 2020 is over, forget it, this is 2021, and it is going to ROCK! Grab yourself some tickets and come on down for a fantastic night with three powerhouses of country music! 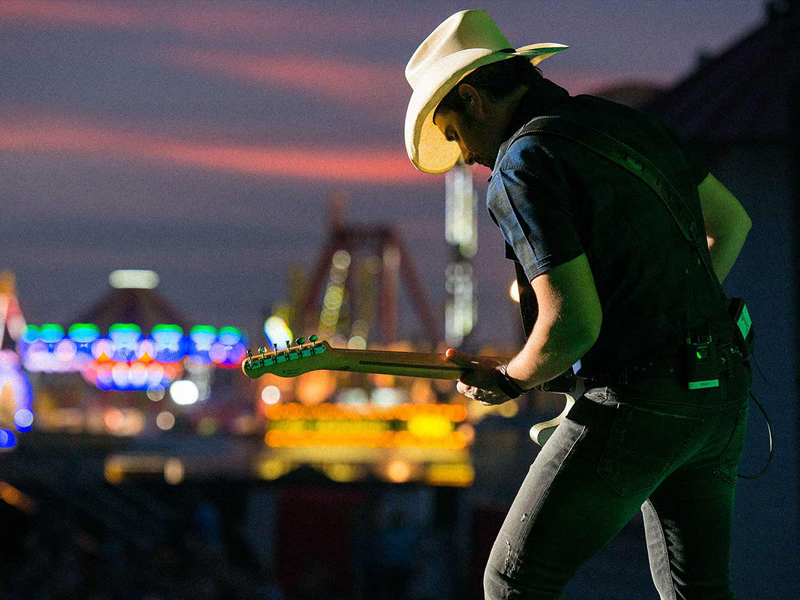 Over the past 20 years Brad Paisley has earned his place in country music history as one of the genre’s most talented and decorated male solo artists. With three Grammys, two American Music Awards, 14 Country Music Association Awards and 15 Academy of Country Music Awards, among many others. A member of the Grand Ole Opry since 2001, Paisley has written 21 of his 24 No. 1 hits, and in 2008 became the first artist to achieve 10 consecutive Billboard Country Airplay No. 1 singles. His 11th studio album, LOVE AND WAR, which was released April 21, 2017, was his 9th consecutive studio album to debut #1 on Billboard's Top Country Albums chart. On April 28, 2017, LOVE AND WAR was released as country music's first ever visual album. A prolific entertainer, Paisley’s first prime-time special, Brad Paisley Thinks He’s Special, aired on ABC in December 2019 and has garnered over 18.1 million viewers to date. Paisley and his wife, Kimberly Williams-Paisley, are co-founders of nonprofit organization The Store, a free-referral based grocery store, which aims to empower low-income individuals and families in the Nashville area.

Jimmie Allen made history as the first black artist to launch a solo career with two consecutive No. 1 hits on country radio, the first being his debut single, Best Shot, which claimed the No. 1 spot for three weeks, and the second being his latest single, Make Me Want To, off his debut album Mercury Lane. Mercury Lane features a cutting-edge mix of country, rock, R&B, and pop that draws upon the influence of his family and small-town upbringing of the critically-acclaimed rising star.

Born in the small town of Kannapolis, North Carolina, Kameron Marlowe sold car parts at General Motors for a living before he got a call that changed his life forever. A recruiter from NBC’s, The Voice, found performance videos of Marlowe on YouTube and reached out with an offer to take him straight to the series’ live auditions. Kameron found success with his independent debut release, Giving You Up, a heartbreak anthem that has topped more than 15 million streams and counting.