Rock giants Breaking Benjamin are known for putting on one hell of a show and this summer the Pennsylvania band comes to Isleta Amphitheater on Wednesday 2nd September 2020 for a colossal show! The chart-topping heavyweights are touring in support of last year's release, Aurora, and will be playing tracks from the album, which saw them reinvent past hits with innovative alternate versions. The headliners will be joined by possibly the best rock support line-up of the year, with Bush, Theory of a Deadman, Saint Asonia, and Cory Marks also performing sets at this mighty event! 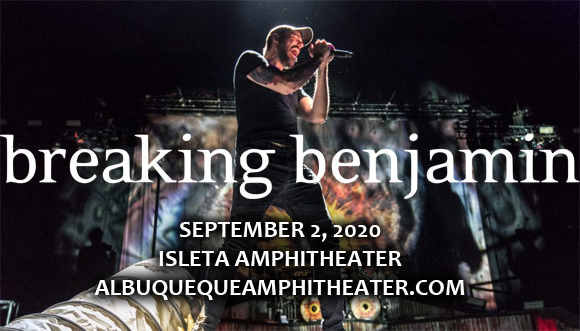 Breaking Benjamin is one of the most successful modern-day hard rock acts. The band formed in Wilkes-Barre, Pennsylvania in 1999 and is fronted by lead singer and principal songwriter Benjamin Burnley who has kept the band's sound consistent throughout several line-up changes over the years. The group debuted in 2002 with the album Saturate, which reached number two on the Billboard Heatseekers Chart helped by its three singles: "Polyamorous", "Skin", and "Medicate". To date, Breaking Benjamin has had three studio albums that have topped the US Rock Albums Chart, with three that have reached number one on the US Alternative Albums Char. Dark Before Dawn (2015), the band's first release after a five-year hiatus, reached number-one on the Billboard 200. Three of the band's albums have been certified platinum and two gold, and they have released two multi-platinum, two platinum, and five gold-certified singles. The group's most recent album is 2019's Aurora.