Indeed, this town ain’t big enough for the love that fans are showing towards country superstar Chris Young. With his “Town Ain’t Big Enough World Tour 2020”, Chris Young is headlining this tour de force which includes an awesome line-up led by direct supporting artist, the multi-platinum performer Scotty McCreery, plus guest artist Payton Smith. Chris Young, Scotty McCreery & Payton Smith will be performing at the Isleta Amphitheater on Saturday 27th June 2020. This is the ultimate country music every fan has been waiting for. The hot ticket alert flag has been raised. That's your cue to act fast by hitting that 'get tickets' link on this website. It's now or never…book your tickets now! 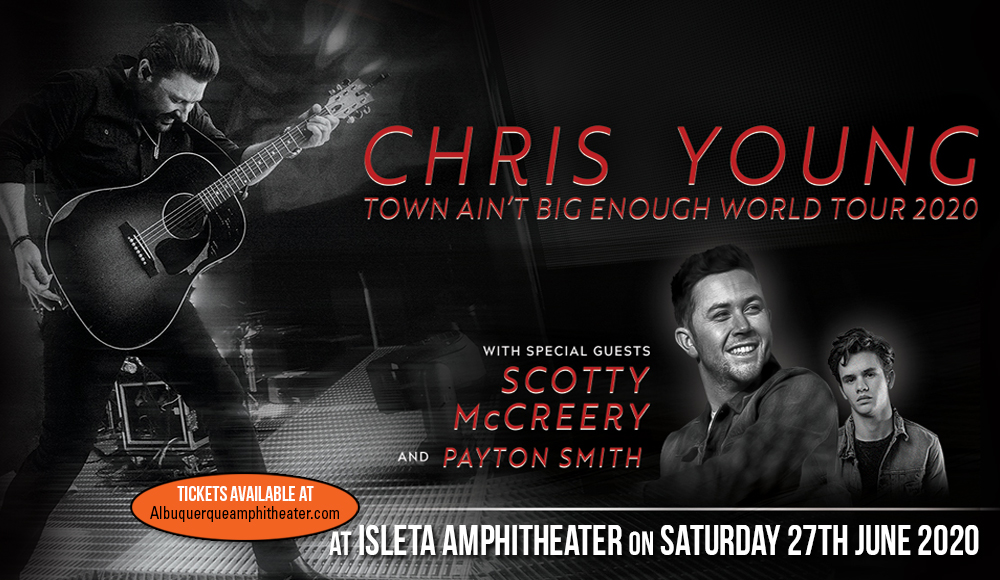 Chris Young celebrated several milestones in 2019, including over 2 Billion streams, and his current single “Drowning,” being named by Rolling Stone as Best Country and Americana Songs of 2019. Those citations alone may attest to the fact that Young's fans and followers are growing by the minute.

Hence for his 2020 tour, there is an air of mutual excitement . “Everyone has been asking about this year since the last tour ended, so I’m happy I finally get to tell everybody about these shows,” shared Chris. “The ‘Town Ain’t Big Enough’ tour is gonna be the biggest one yet!”

Chris Young got his big break in 2006, when he was declared Season 4 winner of the television program "Nashville Star", a TV-reality singing competition. This included a record deal that released his self-titled debut album that spawned two singles on Hot Country Songs with "Drinkin' Me Lonely" and "You're Gonna Love Me". From there, Chris produced an unbroken string of hits which include "Voices", "Gettin' You Home (The Black Dress Song)", "The Man I Want To Be", "Tomorrow" and "You" , all of which went to number 1. Chris Young also bestowed with a crowning achievement when he became a member of the Grand Ole Opry.

You've got to be in this place where one of country music's finest moments take place. Save the date and lock-in those tickets now!