Deftones fans will be thrilled to know that the alt-metallers are on tour this year, coming to Isleta Amphitheater on Thursday 28th April 2022 (Rescheduled from Saturday 11th September 2021)! The band is touring in support of its upcoming new studio album – its first since 2016's Gore – and frontman Chino Moreno said in an interview that the new material has a very strong White Pony vibe, which is something that's bound to go down well with the crowd! It's been several years since the group has been on a US tour and not only will they be performing a headline set, but they're bringing some incredible support acts with them: Gojira & Poppy! 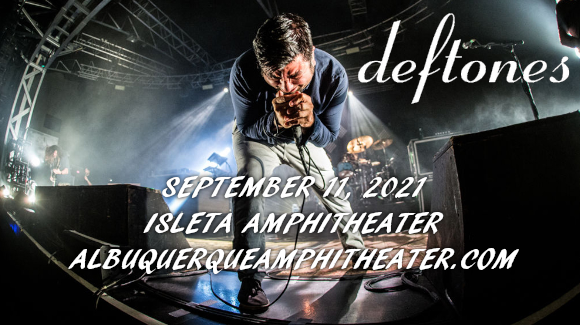 Formed in Sacramento, California in 1988, Deftones led the way in creating a new sound in alternative metal – combining disperate influences like shoegaze, dream pop and hardcore punk to create a melancholy, experimental sound that earned them the moniker "The Radiohead of Metal". It took a while for the group to settle upon a steady line-up, but once it did, it built up an avid fanbase by adhering to a gruelling touring schedule and the band's debut album, Adrenaline, eventually sold over 220,000 copies. By the time the group's follow-up, Around The Fur, was released in 1999, the band was well known among the alt-metal scene and the album was eagerly anticipated. When it arrived, the band had two hit singles with "My Own Summer (Shove It)" and "Be Quiet and Drive (Far Away)". White Pony (2000) was critically acclaimed and reached number 3 on the Billboard 200, as well as launching the single "Change (In the House of Flies)," which reached number 3 on the Alternative Songs chart, and the song "Elite," which won the 2001 Grammy Award-winning track for Best Metal Performance. To date, Deftones has released eight studio albums to date, five of which have charted in the top five of the Billboard 200.