Kenny Chesney brings his Chillaxification tour to Isleta Amphitheater on Wednesday 29th July 2020! One of the world's top country acts, Chesney has had no end of chart-topping hits over the decades and his live shows are legendary, selling out year-upon-year! A consummate showman who belongs on a big stage, the globally-renowned performer commands a room like no-one else, and seeing him live is a must for any fan of the country genre! The Nashville hitmaker will be joined by roots rock band Michael Franti and Spearhead in support! 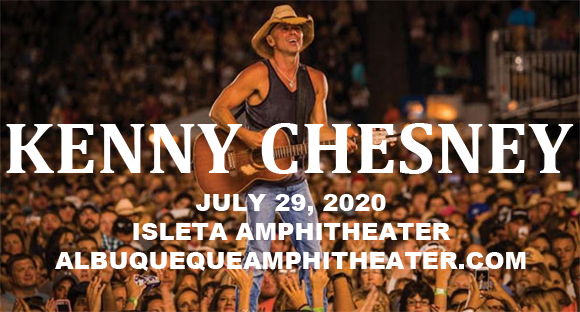 There are few country artists that have enjoyed the mainstream popularity of Kenny Chesney – 26 of his singles have reached the top 40 of the Billboard 200, making him one of the most success crossover artists of all time. The singer, songwriter and record producer has also charted an astounding 40 top-ten singles on the U.S. Billboard Hot Country Songs and Country Airplay charts, including 30 that have hit the top spot. His enviable career began in 1994 with the album In My Wildest Dreams, and since then he has released 20 studio albums, all of which have been certified gold or higher by the RIAA, and has sold over 30 million albums worldwide. In addition to his chart success, Chesney is a best-selling live act whose 2007 Flip-Flop Summer Tour was the highest-grossing country road trip of the year. He has been recognized for his excellence with several awards over the years, including six Academy of Country Music awards and nine awards from the Country Music Association, among others, with both the Country Music Association and the Academy of Country Music awarding him Entertainer of the Year for four consective years.