Fresh off the back of releasing their dope number one album Voices of the Heroes, Lil Baby & Lil Durk are getting ready to storm the stage at Isleta Amphitheater on Monday 20th September 2021 as part of the Back Outside Tour! Of course, the collaborators will be performing hits from the record and Lil Baby will bring a hard-hitting headline set, with Lil Durk acting as his special guest support! It's a hell of a year for hip-hop and this is gonna be THE show, for sure! 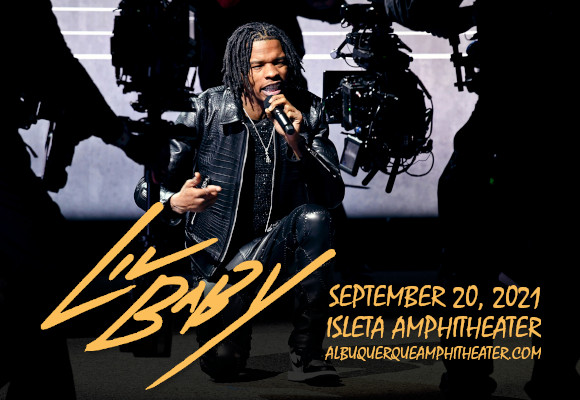 In the six years he’s been recording, Lil Baby as gone from a local hit amidst his scene in Atlanta, Georgia to one of the world’s biggest trap artists! After making his debut in 2015 with the mixtape Perfect Timing (dropped shortly after his release from prison), he found viral success with the hit "Freestyle" from his 2017 mixtape Too Hard, which became a YouTube sensation. This paved the way for his 2018 debut album Harder Than Ever to go straight in at number one on the Billboard 200, racking up platinum status. "Yes Indeed" (with Drake), his biggest single from the album, peaked at six on the Billboard Hot 100. He continued to build on his status as a mainstream rapper with Drip Harder and Street Gossip – two mixtapes released later in the year that also found chart success. My Turn (2020), his sophomore studio album, has been certified triple-platinum and was the most-streamed album of 2020, launching two top-10 hit singles: "We Paid" (with 42 Dugg) and "The Bigger Picture" (which peaked at number three on the Hot 100). The Voice of the Heroes, a collaborative album with Lil Durk, was released in March 2021 and topped the Billboard 200 upon release.