EVENT POSTPONED (date TBA). Hold on to your tickets! They will be valid for the new date once announced.

It's a 'good good life as OneRepublic makes its return to the stage, set to perform their biggest hits and new music off of 2021's "Human" on the Never Ending Summer Tour with NEEDTOBREATHE. Catch the band as they take a pitstop at Isleta Amphitheater on Tuesday, 23rd of August 2022. OneRepublic just recently dropped their newest single "West Coast", an ode for a brand new start. As 2022 further kicks in, don't miss out on this chance to catch OneRepublic perform their biggest hits including "Apologize" and "Counting Stars", and new music from "Human" including "Run", "Lose Somebody", and "Rescue Me" live on stage. Book your tickets now! 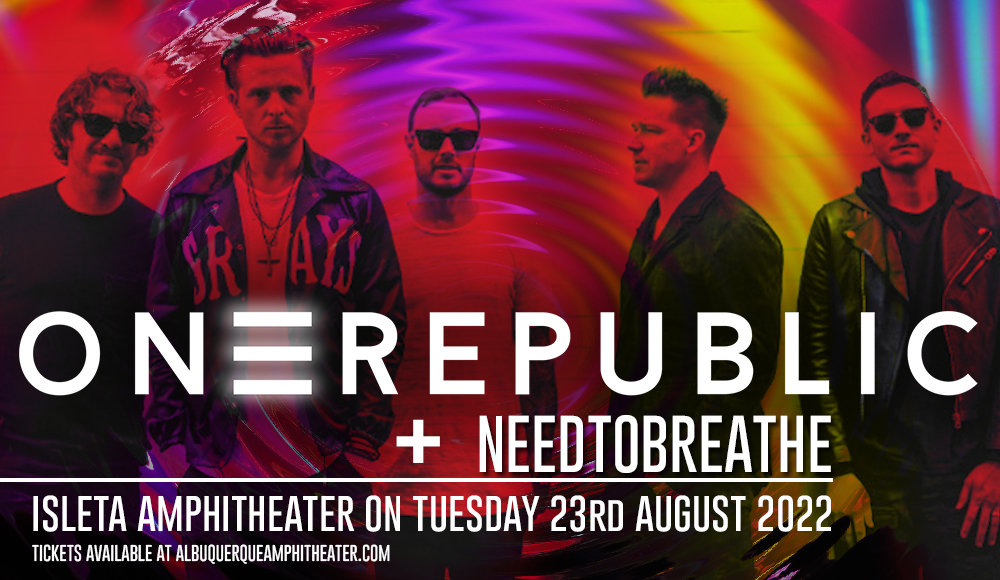 From a strong return with 2021's "Human", OneRepublic ended the year with a surprise, a new single named "Sunshine" and its remixes, a single part of the soundtrack for the movie, ‘Clifford the Big Red Dog’. At the onset of 2022, OneRepublic greeted the year and its fans with their newest single "West Coast", singing “Sometimes you gotta run from a broken heart, Before I turn into a ghost, need a brand new start…"

As the band continues running and living the dream, it all started in 2002 when lead vocalist Ryan Tedder and lead guitarist Zach Filkins reunited and formed what the world would soon know as OneRepublic. Despite their massive success with their debut single "Apologize", it was some sort of a 'beautiful mess – referencing to "This Beautiful Mess", the band's first identity tracing back to 1996 before Tedder and Filkins parted ways and went to college.

Just two months before OneRepublic's debut, their former label dropped the band. At the time, "Apologize" was making rounds in MySpace, with Tedder recalling how they were the #1 unsigned act on the website, praising MySpace and the community for keeping the band together. They then caught the attention of Timbaland's Mosley Music Group.

In 2007, the band dropped its debut album "Dreaming Out Loud", and Timbaland reworked its lead single "Apologize", a massive hit which took the world by storm, now awarded 4x Platinum by the RIAA and 8x Platinum by ARIA.

It may have started as a 'beautiful mess, but the world soon found beautiful music to the ears as OneRepublic continued to drop hits after hits throughout the decade with tracks including "All the Right Moves", "Secrets", "If I Lose Myself", "Good Life", "Rescue Me", and the RIAA Diamond-awarded "Counting Stars".

As the band entered a new decade and era with "Human", OneRepublic is on a never-ending journey of creating beautiful music and captivating live performances for their fans across the globe. Don't miss out on the Never Ending Summer Tour, so book those tickets now!