Thomas Rhett is quickly becoming one of country music's biggest stars! In just a few years, he's become a chart-topping, award-winning artist, and his live shows are lively and spectacular, drawing hundreds and hundreds of fans every time he hits the road! This summer, he heads to Isleta Amphitheater on Saturday 8th August 2020 as part of his Center Point Road Tour, bringing you songs from his album of the same name, and a phenomenal support line-up in the form of Cole Swindell and Hardy! 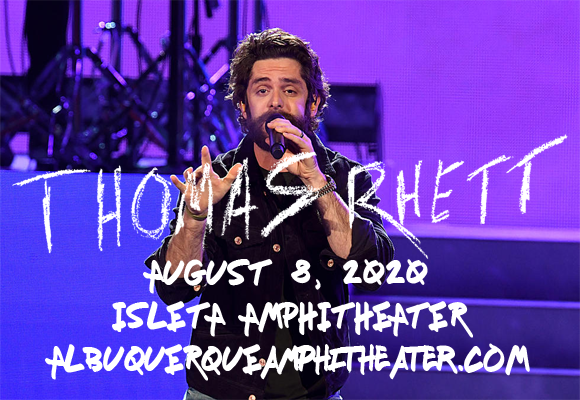 Beginning his music career as a songwriter for a variety of country artists, including Jason Aldean, Lee Brice, Florida Georgia Line, LoCash and Michael Ray, Thmoas Rhett was born to be a country artist. The son of country singer Rhett Aikins, he impressed Valory Music (an imprint of Big Machine Records) when he co-wrote Jason Aldean's 2010 song "I Ain't Ready to Quit" from the album My Kinda Party, and signed with the label the following year. He burst onto the scene as an artist in his own right in 2013 with his debut album It Goes Like This, which charted in the top ten on both the Billboard 200 and the Top Current Albums charts, setting a precedent for his following albums. Two of Rhett's four studio albums have hit number one on the Billboard 200 – Life Changes (2017) and Center Point Road (2019) – and the latter received a nomination for "Best Country Album" at the 62nd annual Grammy Awards in 2020.